There’s been a lot of buzz lately surrounding the numbers in VIDA’s 2012 count of the ratios of male/female contributors in popular literary magazines. I read the oft retweeted article and found it surprising, even shocking. Please take a moment to scroll through the above link and see the figures for yourself if you have not yet done so.

The report is sobering. Only 18% of bylines in Harpers, 22% of books reviewed in the London Review of Books, and 33% of stories in The New Yorker are by women. There have been many responses and dissections of these figures so I will not belabor the point that they show a serious gender imbalance.

VIDA’s dramatic statistics beg several questions. Are there more submissions to these journals from one gender? Are submissions read blind or with knowledge of what sex the submitter is? Are there more male writers in general? Some magazines have answered in defense of their publication record explaining that they do have imbalanced submissions. Tin House, one of the few magazines where women have a margin on men, reckons that women are five times less likely to resubmit after being declined, even when asked to do so.

A thorny issue with multiple facets; there is no clear solution to the problem. Several magazines have pursued or are considering pursuing a sort of affirmative action policy, seeking more submissions from women. Others seem to be shrugging their shoulders and reading on through the slush pile.

But those are other magazines. I wondered about Structo. With slight trepidation, I began a review of our submissions and published pieces, concerned I might find a major disparity. My tally gave me a rough estimate (enough to alleviate my worries). My skill as a statistician being sorely lacking, Structo’s editor Euan Monaghan kindly supplied a more exact count and the graphs to go with the data [for more information about the dataset head to this footnote — Euan]. 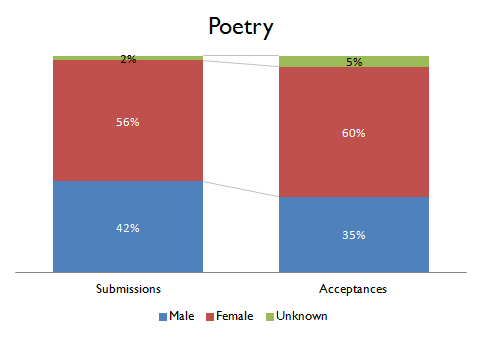 In the poetry category, women outpace men for submissions and publications. The reverse is the case in fiction where men hold a majority in both. These numbers seem reasonable to me; they’re certainly not the damning figures I was worried I would find. It would be nice to see more even submissions in both categories though some small, random difference is to be expected. Considered as a whole, Structo‘s gender ratio is fairly even. I would be hesitant to pursue policies that favor one sex over another such as soliciting more men or having a women’s only issue. I’m glad our stats don’t call for something of this sort.

A few weeks ago, I attended a VIDA event at a conference where these numbers were a hot topic of discussion. The barroom of Daisy Buchanan’s was packed with writers of every gender. The enthusiasm of the audience and the high quality of the readings showed that women’s literature is a vital force. The work read was visceral, strong, and right up my alley.

At Structo we’re committed to publishing the best literature we can get our hands on. We read blind and are currently open for submissions for issue ten. Regardless of gender, we’d love to read your best short fiction, poetry, and translations of both.

* Those marked as ‘unknown’ used either initials or had a non-gender-specific forename and didn’t use gender pronouns in their cover letter.

Just a quick post to let you blog-reading types know that we are now reading submissions of short stories and poetry, and translations of same, for issue ten of Structo. As usual there isn’t a theme, and you can find all the necessary information over at the website. The deadline is the end of April.